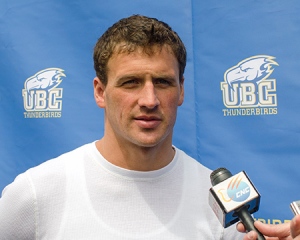 I can tell when I’m being hustled.

Here’s how: street hustlers and their corporate counterparts are diverse, but they share a defining trait: relentless monologue. A true hustler will keep talking without taking a breath in the belief that a word barrage will wear down my resistance until I become compliant. In media we call this “marketing.”

Hustlers aren’t the only monologue artists. In countless conversations I’ve noticed that liars also use too many words. The book of Proverbs advises, “When words are many, transgression is not lacking, but whoever restrains his lips is prudent” (10:19 ESV). So if you go on and on, you’re either imprudent or it’s unlikely you’re telling the truth, or both. I know this from experience as both the listener and the monologist.

Under pressure to come clean, two options are available: (1) Popular culture endorses the example of the celebrity comeback; (2) The New Testament offers the alternative of simple confession to God and others.

Ryan Lochte’s recent interview with Matt Lauer, set off my “hustle” alarm. He talked too much. Using many more words than necessary to answer simple questions reads as evasion.

Lochte’s initial claim that he and other American Olympic swimmers were victims of an armed robbery in Rio cast a shadow over the games and the nation of Brazil. But he now admits that his account (and that of others) did not tell the whole truth. The incident was more of a negotiated settlement for vandalism than a robbery. This huge hit to his credibility means Lochte is desperate for a comeback.

Mea Culpa. The time-honored celebrity comeback process starts with a public announcement of private guilt. Having already lost a over million dollars in endorsement contracts, Lochte needed this phase to go well, so he agreed to the Lauer interview, among others.

But his rambling explanations reveal a man who is working way too hard at it. The truth is easy to tell. Everything else is complicated and exhausting. Take, for example, this exchange between Lochte and Lauer:

Ryan Lochte: “I left – I left details out, which, that’s why I’m in this mess, is I left certain things out. And I over-exaggerated some parts of the story.”

Matt Lauer: “One of the things you appear to have embellished with Billy when you talked to Billy is you said at some point after you refused to sit down the security guard put the gun to your forehead and cocked it. That didn’t happen?

Ryan Lochte: “That didn’t happen. And that’s why I over-exaggerated that part.”

Ryan Lochte: “I don’t know why. You know, it was still hours after the incident happened. I was still intoxicated. I was still under that influence. And I’m not making – me being intoxicated – an excuse. I’m not doing that at all. I mean, it was my fault. And I shouldn’t have said that. I shouldn’t even – just kept it like, ‘I’m not– I’m not saying anything.’ But I over-exaggerated that part. And the gun was drawn but not at my forehead. It wasn’t cocked at my forehead. It was towards my general direction. And as you can see in the surveillance, that’s when my hands went up.”

Matt Lauer: “That doesn’t sound like a robbery. A robbery is when some guy targets you, whether he’s armed or not, to take your money, and your belongings, and your valuables. This guy was negotiating a deal because of what had happened in that walkway. And you guys were on the other end of that negotiation.”

Ryan Lochte: “And that’s why it could be – people can see it in many different directions. All we know is that there was a gun pointed to us and we were demanded to give him money. And end of story.”

Let’s be clear. Over the course of the interview, Lochte apologizes to everyone, takes “full responsibility” and refers to himself as “immature” and “intoxicated.” Mea culpa.

Mea Culpa? Lochte’s admissions are buried in dozens of other disjointed “filler” sentences, and this from a man so familiar with media appearances and doubtless supported by professional management. The bloated paragraphs tumbling out start to feel less like clarification, and more like camouflage designed to distract us from deception.

Moreover, all of his statements of culpability are trumped by this answer to Lauer’s questioning about the distinction between a robbery and a negotiation: “And that’s why it could be – people can see it in many different directions.”

He leaves the central question about the incident in the realm of personal interpretation, making his “confession” just one way to look at what happened. In an interview with Globo TV, Lochte goes even further: “”I wasn’t lying to a certain extent,…. I over-exaggerated what was happening to me.”

I translate that statement as, “Some of what I said was true, and the part that wasn’t, well, that’s just an exaggeration, which isn’t nearly as bad as a full-on falsehood.”

These carefully hedged admissions feel crafted by a damage control consultant. They are not a confession. They are a reframing of the charges, a plea bargain to the lesser offense of lying only in part when viewed from a certain perspective, a celebrity misdemeanor at best, offering a rapid return to the arms of his fans and sponsors.

I’m not writing about Lochte because he is unusual, but because he is so common. We get the celebrities we deserve. He is me. He is all of us.

James 3:1 reminds us that “we all stumble in many ways” (3:2 ESV). Mea culpa. The context of this warning is those who want to teach others need to realize they will be held to a higher standard and all of us will struggle with that requirement. We are all Ryan Lochte, just on different days. He has done what we would do if we could.

When we’ve done wrong and are in real need of restoration, what approach should we use? In public life, the “comeback” is now the commonplace.

From Tiger Woods’ stoic 2010 recitation of his serial adultery on CNN, to congressman Anthony Weiner’s 2011 description of exchanging “messages and photos of an explicit nature with about six women over the last three years,” comebacks begin with stating the facts of the case. Saying what happened out loud is supposed to begin the process of reconciliation. If it didn’t work, it wouldn’t be used all the time.

But many of the appeals for understanding and forgiveness I’ve heard from the famous have a kind of hollowness, a stage-managed feeling intended more to limit the confessor’s legal exposure than to cleanse the soul. The pathos of contrition can itself become a kind of theater aimed at building the brand in the long-term. What if I want a life instead of a brand?

As a Christian pastor I’ve  worked often with people burdened by their failings, a struggle we all share at times. The celebrity comeback model may offer a trajectory back to fame and wealth, but most of us don’t have the staff of lawyers and consultants necessary to make it work. We just need our life back.

The New Testament model offers that radical alternative, a path of humility leading to forgiveness, healing and integrity. I’ve been witness to the effectiveness of this model for many years. It just works. Two key passages cast light on the path:

Horizontal Confession. A primary New Testament source on this issue is found in 1st John 1:9 – “If we confess our sins, he is faithful and just to forgive us our sins and to cleanse us from all unrighteousness.”

John’s admonition tells me the first effect of unrighteousness in my life is to do harm to my relationship with God, the final arbiter of what is right. Until that harm is removed, my conscience will be troubled and my mind distracted. God may even discipline me to prevent my infractions from evolving into something much worse. So sin makes the past my enemy instead of my friend.

“Confess” in John’s writing translates a Greek word (ὁμολογῶμεν) that has the primary meaning of saying “the same thing as another, and, therefore to admit the truth of an accusation.” So when I confess to God, I am saying the same thing about my life that God says about it.

When we’ve fallen short our first stop is not Matt Lauer, and our confession does not depend on anyone’s point of view. Accepting God’s evaluation of our conduct as final humbles us. And it affords the opportunity to turn away from unrighteousness and receive forgiveness on the merits of Jesus’ sacrifice for us on the cross. That forgiveness is total and without loopholes. It’s pardon, not parole.

Vertical Confession. James 5:16 offers a second aspect to our New Testament model of confession. He writes: “Therefore, confess your sins to one another and pray for one another, that you may be healed.”

This teaching may involve confession to a person we have harmed or offended, but it more likely refers to times when we simply need to unburden ourselves to a trusted friend. Healing results from this simple interaction as it drains guilt, shame and brokenness out of our lives before they become even more toxic.

James’ term, “confess,” translates a Greek word (ἐξομολογεῖσθε) that in every New Testament use connotes an admission that is “full, frank, open.” The kind of confession that brings healing holds nothing back. Zero. No hedging. No ambiguity. No wordiness. It does not allow statements like, “I was not lying to a certain extent.”

Confession, then, is not the first step in a campaign to recapture lost status, it is a simple humbling of the heart before others, trusting God to raise us up again at the right time. (1 Peter 5:6) No wonder we are healed in the process.

Setting aside the example of celebrity comebacks, a New Testament model of confession requires no media consultants, involves no damage control, and makes no demands. It comes down to this:

Where the offense is personal, both dimensions of confession are usually best conducted in private. (I’ve watched needy people use public announcements of guilt as just another way to garner attention.) But larger community issues can call for public statements. Fostering racial reconciliation, for example, doubtless requires this public aspect.